Greetings from the happiest nation on Earth! I am here in Copenhagen, Denmark, for about 3 months while I do research and writing as a Fulbright Scholar. Technically, I am a Fulbright-Schuman Scholar. Fulbright-Schuman Scholars—I think there are 6 of us this year—do comparative research in at least two European Union (EU) member states to gain a better understanding of how policies might work within the EU as a whole. We also do comparative analysis between policies in the EU and United States.

My specific research here is going to look at how two EU member states—Denmark and Spain—have promoted renewable energy development and what their experiences might teach us about renewable energy policy design in Europe, the United States, and potentially beyond. Denmark and Spain provide two very different examples of how countries have supported renewable power. Denmark announced in 2013 that it would obtain 100% of its electricity from renewable sources by 2050, while Spain suspended its renewable energy programs after the global economic crisis crashed Spain’s housing market and economy. Before the crisis, Spain’s renewable energy program was booming, and U.S. renewable energy advocates had pointed to Spain as an example of how a country could support renewable power. (Germany has since become the U.S. poster child for some renewables supporters, despite various signs that Germany is also facing several challenges.) Denmark, meanwhile, has generally flown under the radar in the United States, despite its longstanding support for renewables and steady progress towards its ambitious goals. My research will start in Denmark, as I look at how and why Denmark has supported renewable energy development, whether Denmark can achieve its ambitious 100% by 2050 goal, and the lessons Denmark might offer other countries and regions. In January, I will head to Spain and ask many of the same questions, but also look at how and whether Spain could restart its renewable energy development using different policies. Throughout my research, I will also consider how different U.S. states have approached renewables and the degree to which U.S. and EU approaches can inform each other.

Throughout my year as a Fulbright-Schuman Scholar, I will be blogging about my research, my observations, and my experiences in Europe. Some of these blogs will focus on specific issues related to renewable power policies—in which case, I’ll post them both on the Green Energy Institute’s website and my Fulbright blogging page. Some of the blogs will discuss my observations about the places I am going to visit and the people I meet. If they aren’t relevant to renewable power (although isn’t everything connected somehow?), I’ll post them only on my Fulbright blogging page. I hope you enjoy the blog, and I’ll look forward to your comments.
Posted by Melissa Powers at 10:47 AM No comments: 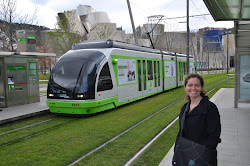